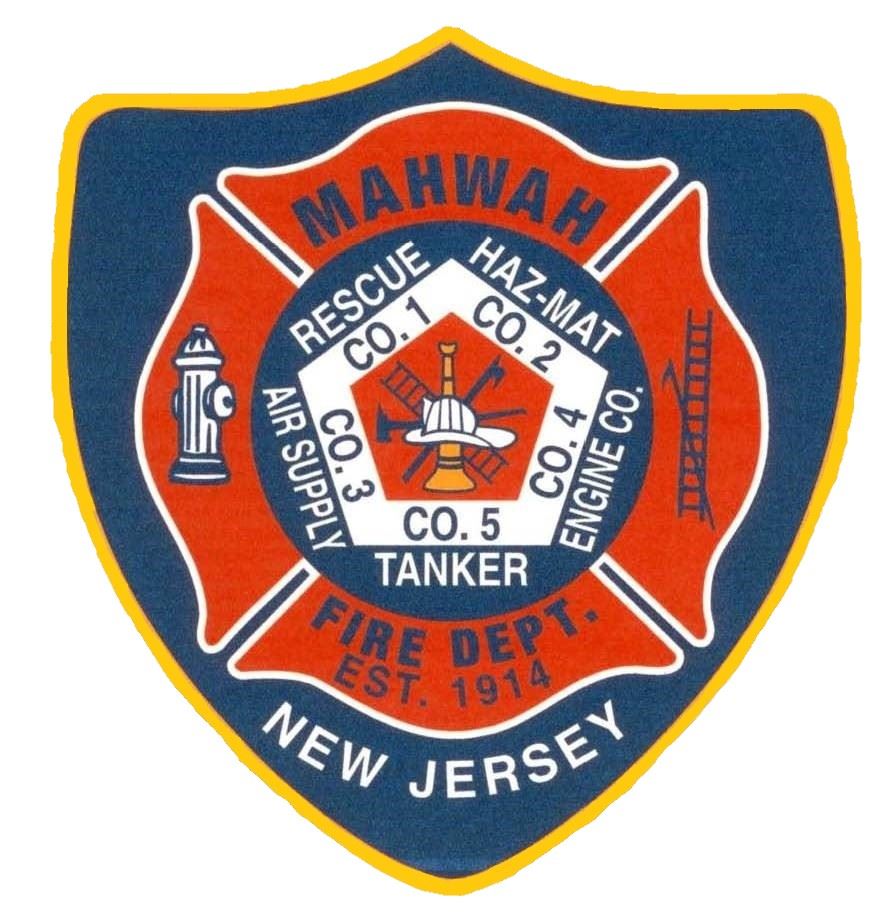 Even before the first fire department was organized, Mahwah had fire hydrants. Colonel Ezra Miller built a reservoir to ensure an abundant supply of water on his property, which is now The Betsy Ross Elementary School off of Miller Road. There were hydrants on his property and streams of water could be thrown on the Mansion within two minutes of an alarm.

As we know, in the late evening of August 29, 1899, a fire started in the servants’ quarters of the mansion. The fire extinguishers that were in the house, had been moved to the orchard by a guest who did not know their purpose. When the hose was attached to an outside hydrant, it had a knot in it and burst. By the time a second hose was attached, the pipes had melted and the mansion burnt to the ground.

In December of 1914, some of the local neighbors in Mahwah decided to formally organize a Volunteer Fire Department. Volunteer Company Number 1 was founded in 1915 with twenty-five charter members. Millard Cooper was elected the first Fire Chief. In 1917, the Fire Department requested that the township provide greater access to water supplies by building new water mains and hydrants. The next year the company purchased a Brockway truck that was housed in a garage on Hillside Avenue owned by Millard Cooper.

ln August 1918 the fire department asked the Township Committee to take over all of its apparatus without any additional expense to the town. The Township Committee passed an ordinance in December 1918 that created a township fire department, thus ending the independence of the company. Throughout the 1920s the department held an annual Turkey Dance, fairs and block dances. Raffles were sold and proceeds were used to start a building fund for a new headquarters.

In 1925 the town paid $7,385 for a Buffalo-Larrabee Hale Triple combination pump, Chemical and Hose car that had a pumping capacity of 750 gallons per minute. Today, Mahwah’s pumpers can pump up to 2,000 gallons per minute. In 1928 the town and the Fire Department agreed to divide the cost of the purchase of a Sterling Alarm Siren. Another electric siren was purchased in 1931 and that one lasted until 1946, at which time it was replaced by an air horn.

In August 1926 the Fire Department requested that the town build a new firehouse and it was built in 1929. Fire Company Number 1 donated $2,000 toward the cost of the building that did not exceed $75,000. For the first few years of the firehouse’s operation, Albert Winter donated water needed to run the firehouse.

Company Number 1 is the home base for fire communication. It houses:

In 1928 Fire Company Number 2, was organized in West Mahwah. Because the town was growing and the homes were spreading out, the first siren was mounted in town to replace the fire bell in that same year. Company Number 2 has 6 pieces of emergency apparatus located in their firehouse on Island Road. Company Number 2 the Hazardous Materials Response Team, which is prepared for all aspects of chemical and biological situations, along with truck company operations.

Fire Company Number 3, was an independent fire company operating in the Northeast area of Mahwah known as Masonicus. The township gave the Masonicus School to the Masonicus Fire Department thus incorporating it into the townships Fire Department in 1947. However, the members waited until 1968 to formally join the Mahwah Fire Department. Company Number 3 houses a pumper and the Fire Police Unit. They also have the Air 3 that is used to fill the breathing air cylinders. Whenever there is a need to have air cylinders filled, replaced or repaired, anywhere in town the firefighters from Company Number 3 are called into action.

Company Number 3 specializes in air operations for the department. It houses:

Company Number 4 specializes in tanker operations for the department and mutual aid. It houses:

Fire Company Number 5, known as the Stag Hill Fire Company back in 1961, was organized because of the poor road conditions on what is now known as Stag Hill Road. The other fire companies had a difficult time getting to the top of the mountain. So the people there formed the Stag Hill Fire Department. Just like Company 3, Company 5’s building was the mountain schoolhouse. The building was remodeled to accommodate a fire engine.

Since there are no hydrants at the top of the mountain, drafting and tanker operations are vital in their area. A 3,500-gallon tanker along with a 1,750 gallons per minute pumper with a 1,000-gallon water tank and a quick attack brush truck that can make its way through some of the off the road areas around town are housed in this firehouse.

Company Number 5 specializes in tanker operations for the department and mutual aid. It houses:

Now 100 years later, the 27 square mile Township of Mahwah and its 26,000 citizens are served and protected by 100 volunteers from five different Fire Companies and Mahwah Emergency Medical Services, Inc. (MEMS). The department also mans a squad of Fire Police who take charge of traffic control at major fire scenes and other emergencies. Mahwah is a proud member of the Northwest Bergen Mutual Aid Association and the Bergen County HAZMAT Association, helping out their neighboring towns whenever they are needed.

Report a Problem
Use our customer service tool to quickly and easily report a variety of quality of life issues.
Garbage & Recycling
Stay up to date with latest notifications and news for pick up and schedule.
Online Services
Access Online Forms, Documents, Permits, Meeting Videos & other services.
Payments
Save time by paying your bills online quickly and easily.